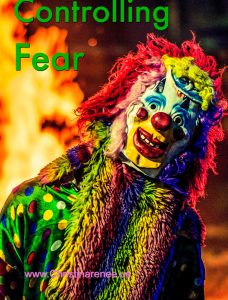 Send in the Clowns

Last week the school sent home notices about clowns making threats to come into the high schools and “kidnap students or harm teachers.” They excused students who wouldn’t be at school that day. The next 2 nights at supper, that’s all my children talked about. As adults, we have a hard time controlling fear, let alone our children. So, how do we do this? By remembering Whose in charge.

God has Numbered My Days

I’ve had a number of really close calls, calls when someone has said I shouldn’t still be alive. But God is the one who has numbered my days.  He controls my life and in the midst of all the horrors we see on the news, the tragedies we hear about, it is easy to forget that.  He alone can give peace in the middle of a storm, or in the center of  fear.

I’ve been afraid of being a passenger in a car after 9 car accidents that seemed impossible to overcome.  I prayed, tried deep breathing,  tried controlling it on my own.

Last year, we visited friends in New Mexico. My husband was not willing to be in the same car with me for that long a trip and I couldn’t fly because of respiratory issues.  So we took the train. It was good, but while I was there I shared my fears about being in a car and we discussed it and prayed. My fear was unfounded and I  knew it. But I didn’t believe it.  And if we know and don’t believe it, we don’t own it. I have never had that same level of fear since and it’s been a year and a half.

So what do we do?

Face our fears.  We have to know what we’re dealing with. Don’t feed them. I have a daughter that has nightmare after watching scary shows with her sister. We’ve banned that show.  There is no need to encourage fear. Don’t let your young children watch horror shows, sometimes even the news. Be protective of their eyes and ears.

Acknowledge there is evil in the world and tragedies and use them as opportunities for prayer and discussion. We often have discussions with our older children after our younger one has gone to bed.  We discuss a lot at dinner just being careful with wording.

And the clowns; our younger children went to school that day. We discussed the safety precautions that their schools had and what they should do if there was a “code blue.”  Our high school daughter we kept home only because she walked daily. And we had a phone call from someone that he saw 2 clowns walking around. I found out later they were picked up by police and had just thought it would be fun to scare people.  Nothing happened at any school that I have heard about. That’s the thing, most of the time we fear something,it never happens.  Do you have trouble controlling fear? What things do you do to combat it?