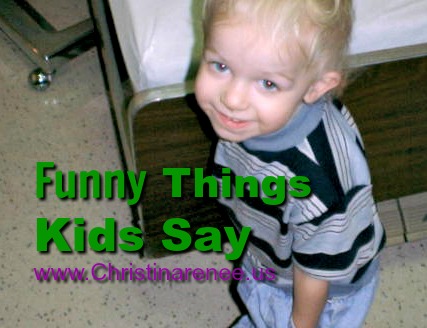 My mother told me many times while my children were growing up was “Write it down”. I did a few things but she’s right, many I forgot. Here are a few funny things kids say to make you laugh. Maybe you’ll realize your kids just aren’t that bad. Smile.

Our oldest son has always like tools. He started taking things apart from 18 months old. Many times taking him away from the outlets. One day we heard a noise. He had taken all the outlet covers off with his sister barrette! The noise we heard was him shocking himself.  Wow! was all he said.

My two sons then (11 & 12) were cooking supper and were making sloppy joes and baked beans. The 11 yo just wanted to dump it all together and get it done. The 12 yo replied “that’s not the way you do it, you put the beans in this pan and add just a hint of bbq sauce.” (He loves to cook.) But, my older daughter thought he might just be watching too much Martha Stewart with me.

My 3 and 5 year olds were outside hungry. My 5yo daughter proceeded to make a “salad” for her brother out of grass and leaves. It must not have been to good because he came in quite indignantly and stated” SERENE CAN’T COOK!” Unfortunately, it’s still not her strong suit.

We were on the way to the library and I heard a voice yell” Ooooh don’t eat that, have my abc gum instead.” I, of course, thought this was awful and asked what was going on. “Mom, Zach found gum on the bottom of his shoe and ate it so I gave him my abc gum instead since that was gross.” Aren’t these awful?

Then another daughter said “that’s nothing. ” He was on sisters bed and whizzed on her pillow and I knew if she found out she’d be mad so I stuck in in the dryer and then sprayed it with perfume.” 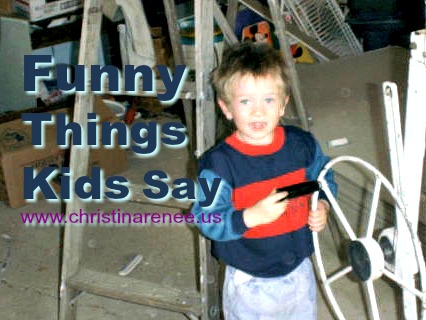 My son was 2 when my husband was dry-walling the ceiling in our garage. Of course, he has to help. He came inside, “I did it all, but Dad helped.”

Buy His Wife A House

I took my oldest ( 11yo) son to the bank with me today. I try to rotate children on errands so I can spend some one on one time with each of them. We were driving from the bank and he tells me “Mom, when I get my shoveling business, I’m going to open a bank account. That way I can buy my wife a house when I get married.” Before you think he is too mature, this is the same son who later that afternoon, chased his sister with a dead mouse.

My 5yo daughter loves to play dress up. Her older sister just recently made her a play dress, forgetting about seam allowances and preshrinking. Needless to say this is now a very tight short dress, you can see she has monkeys on her undies, that short. She can downstairs batting her eyelashes, asking how she looked. My oldest daughter was there visiting and suggested more clothing on. So she went back up and later came down wrapped up in a coat. “Does this make me look like a granny?” “Nooooo“, my oldest daughter replied. “What else do you have on?” “THIS!” she states, waving the coat wide open showing money undies.

The same oldest daughter visiting likes it quiet. Her home is quiet, they have one little girl. She is sitting in the chair, I have 1 daughter practicing the piano, 2 toddlers, (hers and mine) with the 5 yo playing and squealing, children making other noises and a son using a drill to tighten screws in a stool. She tells me in a low voice” I think I will start twitching now.”

Funny stories you have.