WHY WATCH 13 REASONS WHY with YOUR TEENS 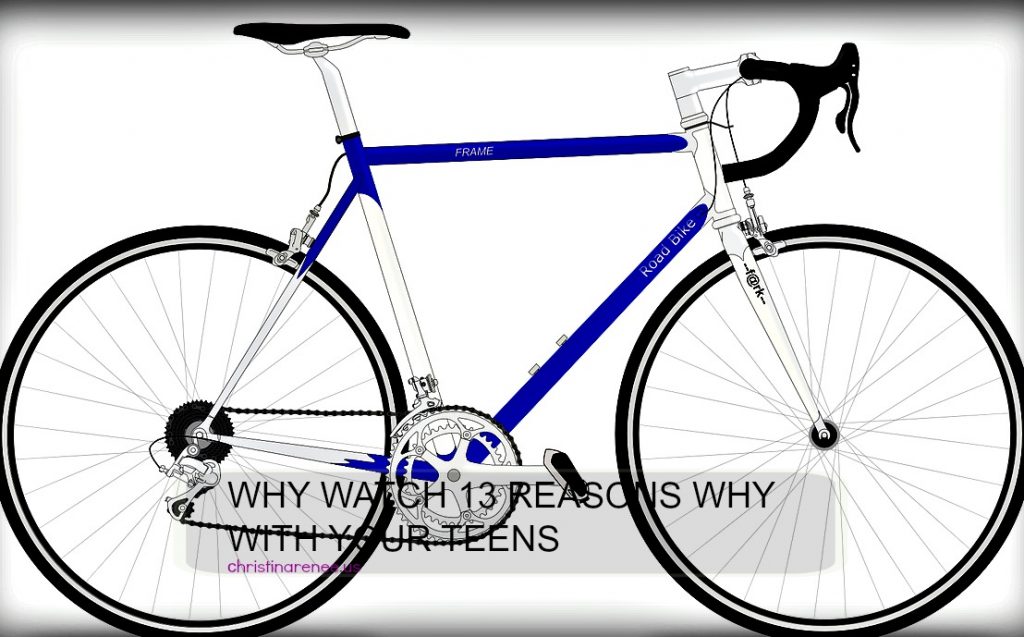 I spent the last two weeks watching 13 Reasons Why with my youngest daughters, ages  13 and 17. We’d watch an episode and discuss it. They had both read the book in school.  Sometimes the discussion took longer than watching the episode.  We talked about each episode and the reason she thought they were responsible for her death. In  13 Reasons Why the tapes  that Hannah Baker made were to tell the Thirteen Reasons Why they were responsible for her killing herself.

Watching each episode I made note of what happened to cause despair. We talked about rumors and lies that were spread.  The lies that were told to make one person would  feel better about themselves and another  person  feel worse. We talked about the “best” list and the difference between boys and girls. How the  guys saw the best list as a compliment and girls would never even think of making a list. set a list that only listed a physical attribute.  The list compartmentalized each person to that part of their body,  not as a whole person or part of their character but just that  body part.

We talked about how friends can hurt you and makes trusting difficult.  Choosing wise friends and how to be careful until you know that they are trustworthy.  We discussed being safe in many different situations. How to protect themselves and their reputations.

Talking to your Parents

We discussed how much her parents hurt.  The agony that they were going through at the loss of her. We talked about what  if it was hard to talk to your parents. What made it hard?  What would make it easier and who else to talk to if you couldn’t talk to your parents. But that  there was always somebody that they can talk to you instead of just going and harming themselves.  I asked them who they talked to when they had things bothering them? And we went through who they could talk to. Although i would really love it if they would talk to me I am happy to know they have someone trustworthy that they can talk to.

In 13 Reasons Why there was so much bullying in school and hurtful situations. I asked how it compared to their schools. Was it better or worse? How could it improve?  We talked again of any instances they had had a bullying in school and what to do if it happened again. How it  had made them feel and how they felt now?

Another topic that came up was cutting. They both knew friends who did it. I asked if they had ever thought of it and why?  Skye in the series said it was what you did instead of committing suicide. It implied that was the only other option to her. So we tried to figure out why  this was such a common choice right now ( it’s one thing they can control) and different options.

One of the more difficult topics were the rapes in 2 of the episodes. How often in happened in real life, verbally saying no!!!, how to avoid those situations and how and when to fight back. We also discussed them taking self defense courses.

We also discussed Hannah’s Baker’s role in this series. How she was made out to be both of heroine and the victim. Which was she? How do we know the difference?  The burden she put on Tony to disperse all of the tapes. the secrecy she wanted.  Whether or not they were responsible for each of their actions for her death?  Who was responsible? We decided  just as you’re responsible for your actions, you are also responsible for your reactions.  What is your take?

In the end, watching 13 Reasons why with my daughters was enlightening and very worthwhile. Not because of the show as much as the discussions it prompted. I loved the opportunity for my daughters and I to have many evenings to discuss some very heavy subjects and to hear their hearts.  If you have watched 13 Reasons Why with your teens what did you think? Did you discuss the series? What insight did you gain into your child?