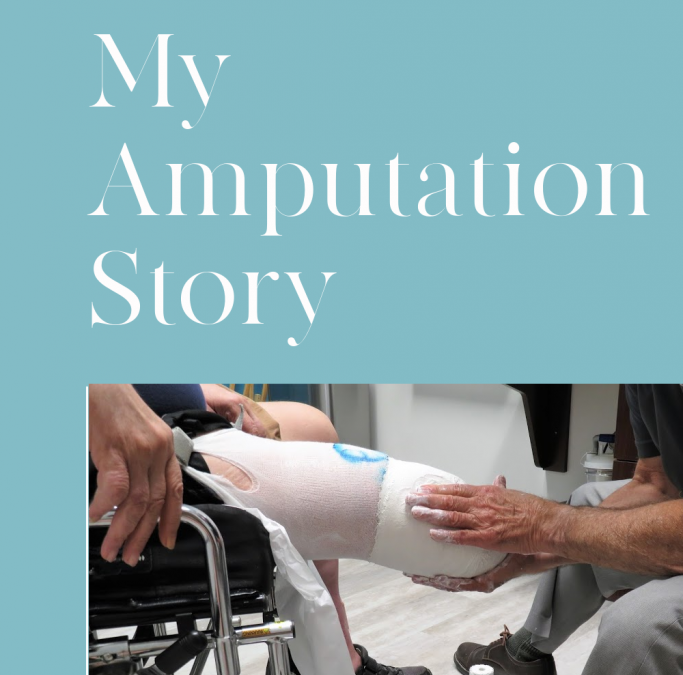 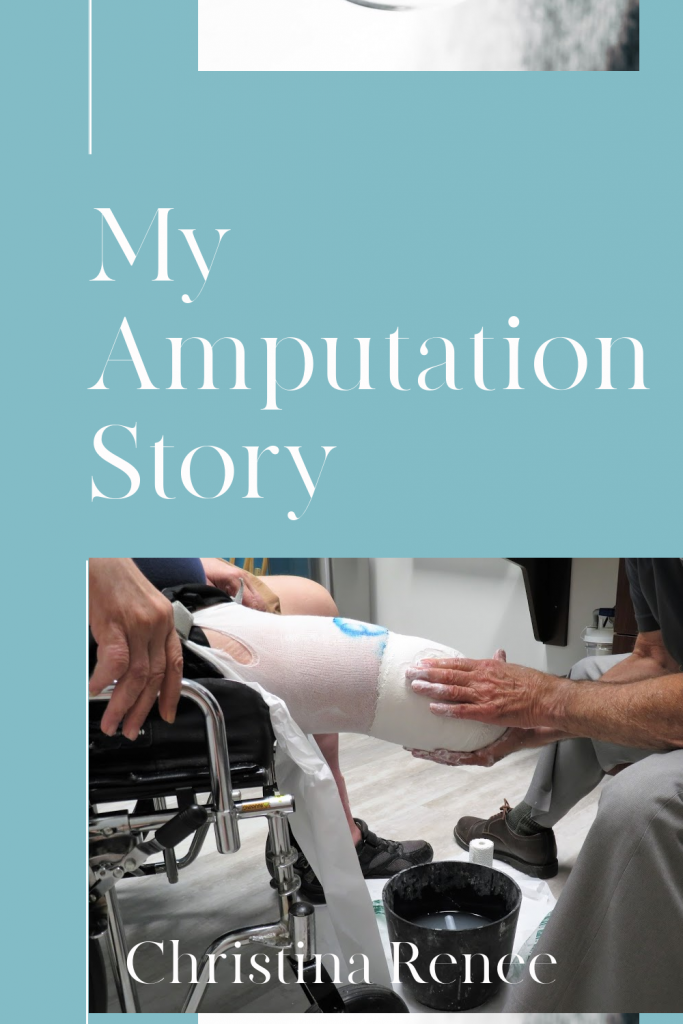 First of all, I have to say I’m sorry for being absent this last year. I had a lot to deal with being a new amputee and having 2 extra surgeries besides. Since I’ve had so many questions about my amputation story, I’m here to tell you more about that.

Last January, I became an amputee. It happened after a long battle with Charcot.  Charcot is a bone disease that basically crushes your bones. I had over a dozen surgeries with steel rods, plates, and many pins to hold my foot together enough to walk. I even had rubber bands between my tibia and fibula to hold those together since over half of my ankle bones had eroded. Eventually, there were not enough bones to attach anything else to and I had to have my left leg amputated mid-calf.

I was in the hospital a week after my amputation surgery and then at a rehabilitation hospital for 2 weeks after that. The health care was wonderful and thankfully, before,  Covid started here. I had a fall at the hospital so that is why I was sent to the rehab hospital. I learned so many things there I wouldn’t have known just going home. They taught me how to safely transfer chairs back and forth. Daily skills that used to come naturally like dressings, showering, and helping around the house. I had 3 hours a day of Physical and Occupational therapy. I also learned I had more limits. If I was too tired to shower safely, I used baby wipes and took one the next day. It was hard work but well worth it. I am actually stronger now in my upper body than I ever have been. And I am keeping on a great exercise schedule for the first time in my life. When you know your health really depends on it, you will find the time to do it.

Since I am a slow healer, it took until the end of May before I could wear a prosthetic. The feeling of freedom from just being able to walking, even holding onto bars, can’t be beaten. You start out just wearing it an hour or two a day and build up from there. BY August, I could wear it 6-8 hours a day. There were so many things I never thought about wearing one.

I thought I could just put my leg on and go about my day. Ha-ha. You have to check your skin for skin irritations and cuts a couple of times a day. The swelling goes up and down so you have to add or replace socks to get the proper thickness for your prosthetic that day. And you SWEAT!!! Gross! A LOT!. In the summer, you take off your leg and empty it out. Yuck! But I could go away by myself. I could walk around. I’m tall, 6’1”, and being in a wheelchair, I have the same field of vision as a very short person. It’s been a very different experience.

Doing household things I normally did that I know do a little differently. For instance, I have a grabber for picking things up. Actually, I have 2 gabbers. The second one had a little peg on the end for pulling up belt loops or other small items; You have to change a lot of ways of doing things. I barely wear button-up pants because I still can’t balance as long on one leg without holding on to something. So I choose quick items to dress in. It also has a magnet on the end for picking things up.  I use a push me-pull me stick for pulling the oven racks. And I learned to only pick up things from the sides instead of leaning over after almost falling out of my chair. Now,  I have a Bob Sweep for vacuuming now since I can’t do that anymore. I do know some wheelchair users use a stick vacuum, the cord is a no-no.

In August, I was found to have an infection in my stump. While it was hard knowing I had the infection, the really hard part was being back in a wheelchair full-time again. Knowing that I couldn’t wear my prosthetic was a major blow.  I  had 2 other surgeries on my stump, one in October and another in November. I had encapsulated infections, which is just infection basically enclosed in like a balloon, Both times they had to go in and scrape out the infection and scrape the bone. The second time, I had a PIC line put in for 6 weeks to combat the infection.

The hospital stays were really different too. No visitors. This was really hard on my children. When I was at the hospital and rehab they came and visited and even ate meals. This time was only phone calls.  The hospital was so much quieter than normal. I spent 5 days the first time and 8 the second. About 5 weeks total this year in the hospital. Right now I am infection free although I still haven’t been able to wear my prosthetic yet because of pain. Hopefully soon.

In January our family moved from an upstairs apartment to a downstairs apartment. Just in time, one week before my amputation. In September we moved, again.  We looked for 2 months before we found a rental house that was wheelchair accessible. Most homes had smaller bedroom and bathroom doors so a wheelchair wouldn’t fit in the doors. We looked at house after house before we finally found one and we live in a large city. It’s also way harder to pack and unpack from a wheelchair. But our home is mostly done, despite 2 surgeries and hospital stays and Christmas and a PIC line and Covid.

The day after moving, my son and I were unpacking, everyone else was cleaning the old apartment. We went to the store and I had a major fall. The sidewalk sloped and I flew off my scooter and into the street. Several kind people stopped and helped me up. I will say most people are very kind. I ended up battered and bruised, no broken bones but I had a concussion. So now,  I have had to watch much more carefully how I go and learn to pay closer attention to my surroundings.

Waiting to Wear my Prostesis

Right now, I was waiting as patiently as I can to wear my prosthetic again. I was only able to wear it for 3 months last year. I am having pain for no reason they can find as well as phantom pain. That is a pain in which I can feel say my ankle hurts or the top of my foot. Both of which are no longer there.  So I have to have no pain for a week before I can try it on again and see how I do. I also have to see my prosthetist and get it refitted. After 2 surgeries and the doctor cutting out a lot of scar tissue off my stump and it is a lot smaller than it was. I am having a new socket built. This is where I am now with my amputation story, if you have questions, feel free to ask.

I’m looking ahead to where I want my blog to go. I still want to help Moms. I also want to do more food prep, freezer meals, and cooking if you are interested in it. What can I help you with? How can I serve you?